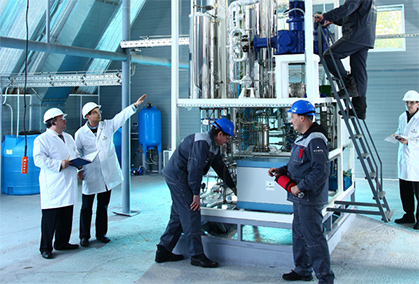 INFRA Technologies has successfully tested the FT reactor for its GTL unit.

INFRA Technologies is pleased to announce that it has successfully tested the full-size prototype of its proprietary Fischer-Tropsch reactor for the small-scale modular container-size pilot plant for processing associated gas into 100 barrels of synthetic oil per day.

The prototype as well as a planned industrial reactor is a 2.7 meter-high tubular apparatus.

Testing included on-site catalyst activation followed by 1,500-hour Fischer-Tropsch synthesis regime with the use of real feedstock, i.e. syngas produced by natural gas reforming. Planned one-pass conversion rate of 70 % was demonstrated as well as high fixed bed productivity of 320 kg of product per 1 cubic meter of reactor volume per hour.

The company intends to launch the first unit in 2014.