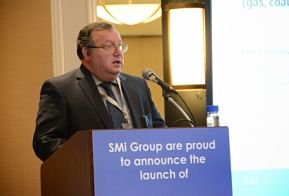 INFRA Technology has participated in and sponsored the inaugural “Gas-to-Liquids North America Conference” organized by SMi in Houston in March 2014. The conference with representatives from across the industry gave a comprehensive overview of the market, looking at GTL Economics, Project Financing, licensing, GTL vs. LNG, current gas demands in North America and in a global context, project and technological updates.

Dr. Vladimir Mordkovich, INFRA’s Chief Technology Officer, was speaking during Technology Innovation session on the first day of the conference. He presented “Gas-to-Oil: New Generation of GTL Technology”, describing key features of INFRA’s technology, which produces more than 400 kg of synthetic oil per 1,000 cubic meters of gas, has low capital and operating expenses and has no by-products, ensuring positive NPV of GTL plants on a standalone basis even for small-scale facilities.

Following successful sale of its pilot full-cycle GTL plant to Gazprom, INFRA finalized the basic engineering project design and started FEED for a 100 bbl/d pilot GTL unit. Dr. Mordkovich announced the company’s plans for further construction of the first 100 bbl/d prototype intended both as a demonstration plant to confirm main parameters of the technology on an industrial scale, and as the first in the serial production of small-scale modular transportable units.