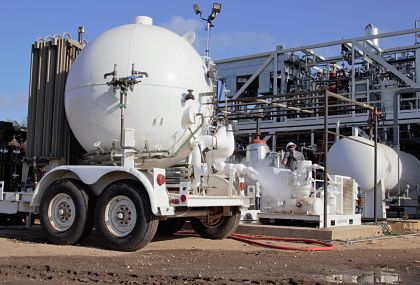 It is becoming more challenging and expensive to keep the current pace of oil exploration while minimizing environmental impact. Scientists are looking for innovative ways to produce fuel, and creating synthetic fuel out of associated gas is a solution.

About 5% of the world's natural gas production goes up in smoke every year. Associated petroleum gas is a by-product of petroleum oil separation, which is commonly vented or burned into the atmosphere instead of reaching customers or being consumed on site. This is a $40 billion loss of a non-renewable natural energy resource that could provide for a quarter of the United States' natural gas needs.

According to World Bank data for 2014, the United States ranks fourth in the world in gas flaring, and with the rapid growth of oil production in North Dakota, even more natural gas is being flared.

It is becoming increasingly controversial to vent nearly 400 million tons of carbon monoxide and harmful pollutants into the environment, but government regulations and flaring penalties can backfire, resulting in cutbacks in US oil production. Without a solution to APG, remote and deepwater oil production are hampered because there are no close markets for the natural gas, and separate transportation equipment is cost-prohibitive.

Estimates reveal that 370 billion cubic feet of APG are re-injected into the ground every year, but this is temporary and can endanger future oil production in the area. The current preferred solution is a liquefied natural gas, which is costly and requires building a new, separate infrastructure for storage and transportation.

One solution to gas flaring is converting associated gas into synthetic crude oil. There are a number of technologies that convert various types of carbon-containing materials into liquid hydrocarbon fuels, collectively referred to as XTL: CTL-coal-to-liquid, BTL-biomass-to-liquid, and GTL-gas-to-liquid. Complex hydrocarbons are created from simpler organic chemicals through catalytic reactions using the Fischer-Tropsch (F-T) process. Synthetic fuels have been shown to have a number of benefits, such as lower emissions and enhancements in engine performance.

Synthetic fuel production originated in 1920s Germany, when German scientists Franz Fischer and Hans Tropsch succeeded in producing hydrocarbons from coal. They produced synthetic fuel, which was used by the Germans during the Second World War. Unfortunately, the technology was expensive and produced too many by-products.

Today, new catalysts developed by INFRA Technology allow synthetic fuel to be produced at a lower cost, with no by-products. This technology is differentiated by the use of proprietary pelletized cobalt-based catalyst in the Fischer-Tropsch step of the process with the new generation modularized tubular fixed bed reactor.

INFRA.xtl technology process consists of two main stages. Stage one is the generation of synthesis gas - conversion of carbonaceous material like natural gas into a mixture of hydrogen and carbon monoxide. The steam methane reforming (SMR) is used extensively in the chemical industry in the manufacturing of ammonia, methanol and hydrogen.

The second stage is the F-T process using the proprietary INFRA.xtl cobalt-based catalyst; the catalytic conversion using the Fischer-Tropsch synthesis reaction of syngas into a mixture of middle distillates such as gasoline, kerosene and diesel, which contains no sulfur, tar, or carcinogenic aromatic hydrocarbons.

A less complicated flow sheet improves CAPEX, OPEX, and process efficiency. The process is uniquely optimized for the production of clean hydrocarbons without the addition of oxygenates. This eliminates the costs associated with oxygenate utilization either through waste management, or additional processing, marketing and logistics of their derivative products. The catalyst's much higher operating temperature when compared to similar catalysts-up to 260° represents another significant improvement since it allows the reactor to generate industrial heat. As a result, heat management of the process becomes much more efficient, driving the INFRA.xtl technology-based plant productivity higher.

One of the primary advantages of INFRA.xtl is the liquid light hydrocarbon mixture which comes straight out of the Fischer-Tropsch reactor without the cumbersome and capital-intensive hydrocracking and upgrading stage.

Synthetic crude is a stable product completely compatible with existing oil infrastructure. It mixes well with mineral crude and can easily be upgraded into ultra-high quality drop-in motor fuels with zero aromatics and no sulfur. This technology allows for liquid motor fuels or synthetic crude oil to be produced at the production site, monetizing otherwise unused gas resources.

The existing F-T process industrial applications produce multiple hydrocarbon products ranging from gases to waxes, so having a mono-product allows the elimination of the whole stage of the traditional technology associated with the product upgrading facility. This also reduces capital and operating costs, as well as marketing and logistics associated with the by-products of the traditional XTL plants, resulting in the overall cost and efficiency of the project being improved. The final product is a hydrocarbon fuel with a large proportion of isoparaffins (up to 50%), which makes it ideal for a high-quality winter diesel and aviation fuel precursor.

High process efficiency is key to the technology's economic feasibility. Technology by INFRA reduces the price gap between oil and natural gas to the cost of GTL conversion. It is at least 50% less expensive than comparable technologies, which makes the production of synthetic oil not only economically feasible, but also ensures the GTL process is profitable as a rule and cost competitive with oil refining.

Catalysts are essential for the production of clean synthetic fuels. The productivity of traditional catalysts is limited. The INFRA.xtl technology process uses a specially designed, proprietary cobalt-based catalyst, which has a significantly longer lifetime than industry's standard by at least a two-fold increase.

Our catalysts use porous pellets of composite material with divided function loaded with cobalt nanoparticles. The reaction of the Fischer-Tropsch synthesis and cracking are happening simultaneously on surface of the catalyst granules. The catalyst is less sensitive to higher temperatures and mass transfer limitations resulting in productivity of Fischer-Tropsch process being significantly increased.

With more than 75 employees, INFRA's management has many years of combined full cycle experience within the oil and gas industry. INFRA's demonstration GTL plant in Texas processes 1 million cubic feet of natural gas to produce 100 barrels per day of synthetic oil.

GTL technology of the fourth-generation aims to alter energy materials and resource systems worldwide by bringing natural gas and coal resources to the crude oil and transportation fuels market.