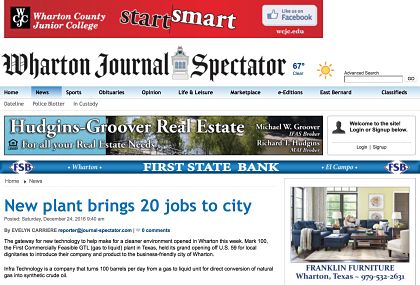 The gateway for new technology to help make for a cleaner environment opened in Wharton this week. Mark 100, the First Commercially Feasible GTL (gas to liquid) plant in Texas, held its grand opening off U.S. 59 for local dignitaries to introduce their company and product to the business-friendly city of Wharton.
Infra Technology is a company that turns 100 barrels per day from a gas to liquid unit for direct conversion of natural gas into synthetic crude oil.

The company came to Wharton in hopes of bringing its unique factory to life.

After perfecting their pilot program, Infra decided to start building their first factory about six months ago. The plant was built off site in shipping containers and assembled upon arrival at the Wharton location.

The cost of building and running the plant is significantly lower as compared to other GTL technologies.

Infra is an international technology company. Infra developed, patented and implemented the next generation of the Gas-to-Liquids (GTL) technology, based on the Fischer-Tropsch synthesis process, for the production of light synthetic oil and clean liquid synthetic transportation fuels from natural and associated gas, as well as from biomass and other fossil fuels (XTL).

This week marked the culmination of an idea that began about 7 years ago for the Mark 100 site. An idea about a feasible way to monetize ample resources of gaseous deposits as well as provide a solution to one of the industry’s most pressing issues which would eliminate gas flaring.

“The timing for such a demonstration couldn’t happen soon enough,” said Kaan Akyalcin Chief Executive Officer. “World Bank initiatives of Global partnership to stop flaring by 2030 has already spread its importance around the globe, and over 18 countries already endorsed such initiatives, and oil companies and development institutions around the world are encouraged to step up and together help to utilize those associated and stranded gas resources.”

Addressing the needs of the industry, Infra Technology group has developed and patented its own Gas to Liquids (GTL) technology, for the production of light synthetic oil and clean liquid synthetic transportation fuels from natural and associated gas. The opening of Infra’s GTL plant in Wharton is an important step for and into the future of the company. The new plant will not only produce synthetic fuels, but it will also significantly contribute to further strengthening the importance of the environmental protection and INFRA’s position in the global initiative.

“Our new plant Mark 100, with the compact footprint of only 4,000 square feet, for the first time makes small scale, transportable GTL technology possible and feasible,” said Akyalcin. “Our 100 bpd GTL Plant contains an array of capabilities, which we believe is unlike any other GTL facility anywhere.”

The new plant created more than 20 jobs to maintain and operate and will assist oil and gas companies in improving certain aspects of their processes by eliminating waste and will enable them to be more environmentally friendly while being economically feasible.

The plant will serve as a demonstration of Infra’s key competitive advantages and an important reference for future applications of the technology. Its synthetic oil is a premium product and can be used for producing valuable chemicals and transportation fuels.

“We hope that this is the start of many relationships with companies that provide such niche services for the world of oil,” said Wharton Mayor Tim Barker. “And we hope that our city stays the business friendly environment that brings in new jobs.”