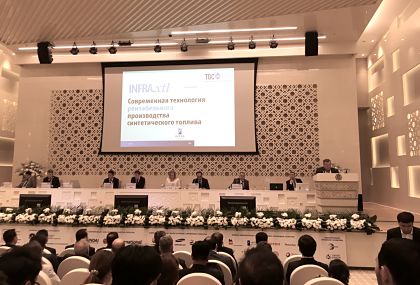 INFRA Technology sponsored the Gas Congress in Turkmenistan in 2016 and presented at the “Turkmenistan’s Gas Monetization: A Priority Area for Investment. The Latest Technologies and Developments in Gas Processing Industry” session.

Dr. Mordkovich also made clear that the technology has been proven both at pilot and industrial scale and is ready for commercial deployment. INFRA’s technology offers opportunities for the end-use consumption of the natural and associated gas as synthetic oil, motor fuel (diesel and gasoline) and valuable feed for petrochemical production, such as propylene.

In Turkmenistan, INFRA’s technology can be applied for both offshore and onshore conversion of natural and associated gas. INFRA’s GTL technology can significantly contribute to the dynamic economic and financial development of Turkmenistan, as well as to the country’s energy independence. Turkmenistan ranks 4th in the world by natural gas reserves, and natural gas constitutes large portion of the nation’s economy. This makes diversification of gas uses and conversion of gas into high value added products especially important.

The Gas Congress was attended by all major players in the country’s oil and gas industry, including Turkmenistan Oil and Gas Ministry, the State Agency for Foreign Investment, State Concerns “Turkmengaz” and “Turkmenoil”, as well as major foreign international companies.