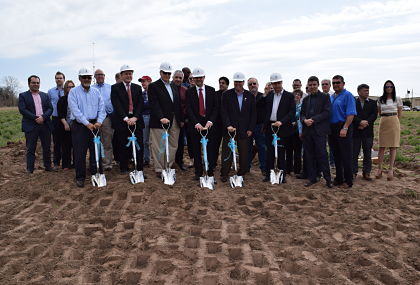 On March 2, 2016 INFRA Technology LLC held a ground-breaking ceremony for the construction of its innovative modular 100 BPD GTL plant Mark100 in Wharton, Texas, in close proximity to Houston.

The plant will be producing synthetic crude from natural gas. It will serve as a demonstration of INFRA’s proprietary technology which provides solution to one of the industry’s most pressing problem – processing associated gas in an economically feasible manner. Today, over 150 billion cubic meters of associated gas are flared and the same amount is vented annually, representing a huge waste of non-renewable natural energy resource, equivalent to 20% of the US or 30% of the European Union’s gas consumption per year. Apart from financial loss, this adds 350 million tons of carbon dioxide and other emissions, harmful to the environment. Currently, US is the fifth biggest contributor to flaring.

Mr. Kaan Akyalcin, INFRA's Chief Executive Officer, opened the ceremony and presented the project. “This plant will become the best demonstration of the significant advantages offered by INFRA’s innovative technology. – he said. “We believe that our technology has a number of applications that will enable to unlock economic potential of associated gas, remote and offshore gas fields as well as bio-waste resources and coal. Synthetic fuels are less harmful to the environment and can use existing oil infrastructure. We look forward to a successful plant completion and start-up. There is a lot of interest and we will be hosting many visitors from all over the world coming to see how associated and natural gas is converted into high value-added synthetic fuel. We express our gratitude for all the support that we have received from Wharton County, City of Wharton and Wharton Industrial Foundation”.

The ceremony was attended by Mr. Domingo Montalvo, Jr., Mayor of the City of Wharton, Mr. Andres Garza, City Manager, Mr. Gordon Franklin, President of Wharton Industrial Foundation, as well as other guests and officials.

Mayor of the City of Wharton welcomed INFRA to the city and expressed his hope that this plant will make positive contribution to the area’s economic development.

The plant will be commissioned and started-up in the second quarter of 2016.

INFRA is an international technology company. INFRA developed, patented and implemented the next generation of the Gas-to-Liquids (GTL) technology, based on the Fischer-Tropsch synthesis process, for the production of light synthetic oil and clean liquid synthetic transportation fuels from natural and associated gas, as well as from biomass and other fossil fuels (XTL). The main feature of INFRA’s technology is direct conversion of natural gas into liquid synthetic crude.